How does Botox® work? 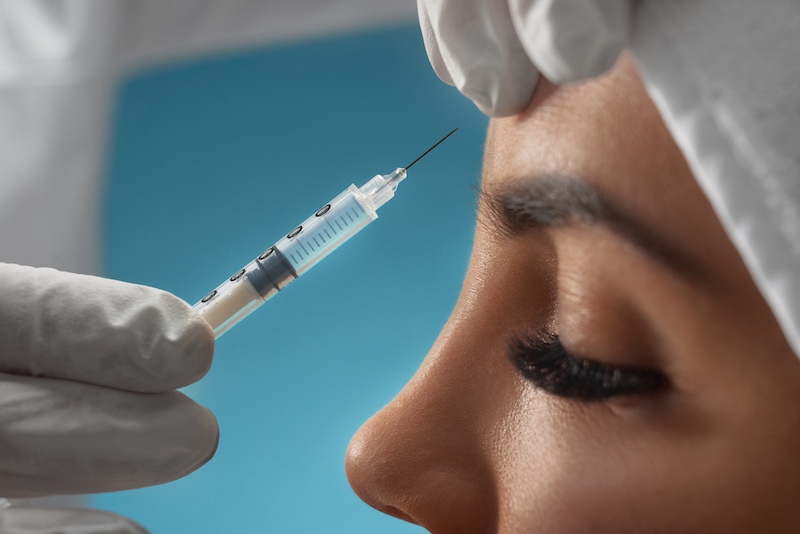 How Does Botox Work?

Botox in our Scottsdale, AZ location. How does it work anyway? Botulinum toxin (Botox) consists of 7 types of neurotoxins; however, only toxins A and B are used clinically. Botox A is used for several disorders in the field of medicine, particularly in dermatology, for cosmetic purposes. All types of botulinum interfere with neural transmission by blocking the release of acetylcholine, the principal neurotransmitter at the neuromuscular junction, causing muscle paralysis. The weakness induced by injection with botulinum toxin A usually lasts about three months.

How Long Does It Take?

The affected nerve terminals do not degenerate, but the blockage of neurotransmitter release is irreversible. Function is restored (ie the Botox wears off…)by the sprouting of nerve terminals and formation of new synaptic contacts; this usually takes two to three months..this means it will only last 2-3 months. The toxin requires 24-72 hours to take effect, reflecting the time necessary to disrupt the synaptosomal process. In very rare circumstances, some individuals may require as many as five days for the full effect to be observed. Peaking at about 10 days, the effect of botulinum toxin lasts nearly 8-12 weeks…again, it only last 2-3 months.

There is some literature that will report up to 4 months but this is usually with repeat treatment over a year. I will on occasion have someone come in that tells me that went to see “XYZ person got sub-therapeutic amounts of Botox and it lasted 6 months. I regretfully need to tell them to go back there because they have the “magic Botox”. Botox is to an extent dose dependent, meaning the more you use the better it works and longer it lasts. However there is an upper limit in which more is not better. For example, an area such as frown lines which would typically take about 20-25 units will only last 2-3 months putting in 50 units will not give you 6 months because the mechanism of action does not work that way. If anything its more likely to have you create an antibody response.

That same area if you only put in 10 units, you might get a mild response but it will not work as good or last as long. There are consensus guidelines established for dosing. We know on average what doses are needed in what areas and will work on most people. That being said there are exceptions such a men who typically need more in general but maybe not because they often don’t want to people totally “smooth”. Also if you are in your early 20’s minimal lines and more doing it as preventive you could probably go with lower amounts. But in general the following amount are what will work for most whether its Botox, Xeomin, or Juveau, the conversion is 1:1 for all 3. If using Dysport (which I do not) the amount is double or tripled so don’t get misled when you see Dysport are $4/unit you need 3x as much!

Botox Scottsdale – How Much Do You Need?

So how much do you need? The standard dose for Botox usage is 20 Units. The minimum dose for treating glabellar frown lines is 20 Units as it was found that dosing 20–40 Units of Botox. Forehead lines I find vary more than any other area. Some people have wide and high forehead such as myself ( I call myself and five head) others have short and narrow. However, on average most people with need 10-20 units in the forehead. The lines on the sides of the eyes affectionately called “crows feet” the consensus guidelines state 12-30 units. This is all just the top third of the face. We’ve really expanded the areas of Botox such as the “lip flip” which makes the top lip evert and gives the illusion of a fuller lip as well as significantly helps vertical lines above the lip.

The dosing for this is typically 2-5 units per quadrant. The orange peels chin….this is from and active mentalis muscle this can be treated with 5-10 units. The down turned corners of the mouth that make you look made or sad even when not….this is from an active depressor annuli or is muscle that usually also takes 2-5 units per side. The lower third of the face is tricky because you can’t use more units and make it last longer and even a unit or two too much can make it feel “weird” you smile might be off a bit or its hard to such out of a straw fortunately that will go away and the results are worth it. Then there is the neck and even facial shaping that can be done with Botox which involve injecting into the mandible and masseter muscles (fun fact it can really help TMJ and teeth grinding ). Anyway, when you go get Botox or whatever toxin you pick and you hear 60 or 70 units you can see how it really isn’t that much it just sound like a big number.

“Beauty is being the best possible version of yourself, inside and out”

Thanks for reading!
For more information or to schedule an appointment please call the office at 480-419-6996 or feel free to email me directly at stefanie@thesshh.com
Dr. Stefanie Maass PhD., FNP, FAARM